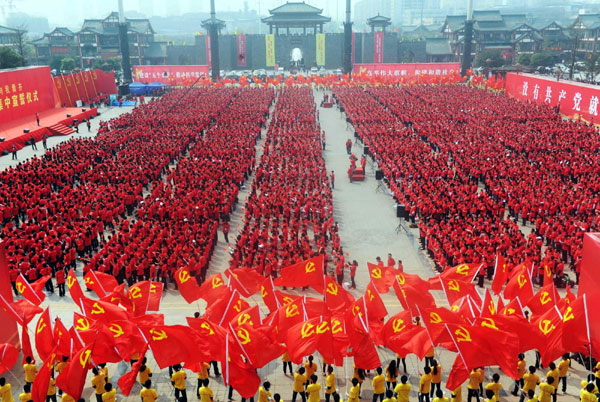 The 90th anniversary of the Communist Party of China (Friday, 1st July 2011) has been announced with great fanfare. There has been a huge promotional campaign to raise awareness of the red culture and it is creating buzz worldwide.

With all the celebrations going on, be sure to note that there will bound to be problems with travel inside the country.

Check Visa regulations and movement restrictions in China if you are visiting.  Internet restrictions will also be tightened. To commemorate this major event, the red revival has moved beyond just singing Communist classics, as promotional items are also given away with something tangible for patriots to remember this day.

One great instance of such promotions would be commemorative coins issued by the People’s Bank of China for the upcoming celebration. It has resulted in a huge response since its release, as people scrambled to get their hands on one as collection in memory of this historical moment.

The success China’s central bank has is proof to Chinese or even Western companies that it is a great opportunity to ride on this occasion to hand out gifts for commemoration and promoting your brand at the same time. Doing so could be one way to spur people to busk in the festive spirits as well as giving thanks to the CPC for paving the way  for modern China.

The revival has stirred nostalgia in many; ‘retro’ and ‘red’ are two relevant themes your company could focus on when brainstorming for promotional ideas. To get the ball rolling, we suggest a red, retro-covered notebook with Mao’s quotes on each page (inspired by the little red book).

It is never too late to carry out these campaigns even after the actual day itself.

Note also that HK office closed tomorrow as holiday to mark Handover of HKSAR to China.