The hockey puck as well as being a sports item and merchandise regular can also make a great promotional product. As seen with footballs which can be cheaply made, easily branded and have mass appeal. The hockey puck can have a similar effect as a marketing tool. Granted its appeal will only be felt in countries that enjoy the sport. However in countries where hockey is the national sport, its power as a marketing gift is great. Canada, Sweden, Finland and Russia can all consider hockey as the most followed sports in the country. 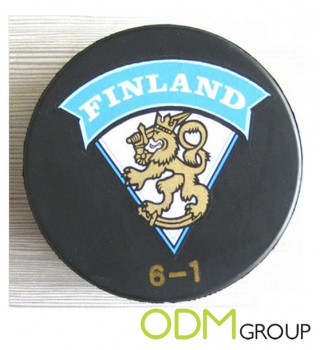 How can the hockey puck be used as a promotional product.

First off all it is an easily made item that as a promotional product does not have to meet the same standards that a regulation hockey puck must do.  The large round surface makes a perfect area for branding and as a puck is all black, any colour or logo will really stand out.

As on pack promotion

Due to its size it would be easily utilized as an on-pack promotion or GWP. As Hockey is a male oriented sport some certain brands could really use this to their advantage such as beer brands, sport equipment manufacturers or hardware providers. A Beer case on pack promotion with a branded hockey puck would be the perfect example where a beer brand could drive sales during an international hockey tournament for example.

The example in the picture is of a celebratory hockey puck that was branded with the Finnish national hockey team logo and the caption of 6-1. The puck is commemorative item from when Finland beat Sweden by the amazing scoreline of 6-1 in the finals of the European hockey championships. The item no doubt was a much cherished item in Finland.