Qingdao base for ODM.

ODM are stationing new staff in Qingdao, North of China,  to be closer to some of our key suppliers.   This enables us to visit key factories on a more regular basis – the flight from Shanghai and associated commutes made it impossible to visit suppliers for just the day.

The team in Qingdao will focus on….

In 1984 the Chinese government named a district of Qingdao a Special Economic and Technology Development Zone (SETDZ). Along with this district, the entire city had gone through amazing development of secondary and tertiary industries. As an important trading port in the province, Qingdao flourishes with foreign investment and international trade. South Korea and Japan in particular made extensive investment in the city. Approximately 80,000 South Korean citizens reside there. Construction proceeds at a relatively fast pace in Qingdao.

In terms of primary industry, Qingdao has an estimated 50,000 acres (200 km²) of arable land. Qingdao has a zigzagging pattern coastline, and thus possesses an invaluable stock of fish, shrimp, and other sea resources.

Qingdao is also home to a variety of mineral resources. Up to thirty different kinds have been mined. Qingdao’s wind power electricity generation performs at among the best levels in the region.  The city has also a number of paper mills.  It is also home to Haier, a large white goods manufacturer, and Hisense, a major electronics company.

More background on the destination and for tourists to Qingdao.

Qingdao is a major city (7,579,900 residents) in eastern Shandong province. Qingdao today is a major seaport, naval base, and industrial center. It is also the site of the Tsingtao Brewery. The character 青 (qīng) in Chinese means “green” or “lush”, while the character 岛 (dǎo) means “island”.    The following is a good website for visitors to the city www.thatsqingdao.com

Qingdao people have a strong liking for sports.  As the host for the 29th Olympic sailing events, Qingdao has begun making overall plans in order to improve the ecological environment, highlight “Green Olympics”, “High-tech Olympics” and “Humanistic Olympics”, and build the city into a green Olympic metropolis with the best sailing facilities in Asia. 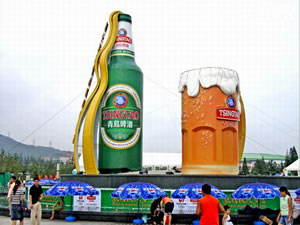 Internationally, Qingdao is perhaps best known for its Tsingtao Brewery, which German settlers founded in 1903, and which produces Tsingtao beer, now the most famous Chinese beer. The Qingdao International Beer Festival is a yearly festival held in Qingdao. The event is jointly sponsored by national state ministries and the Qingdao Municipal Government.   The festival began in 1991 when the Tsingtao Brewery first applied for permission for a Beer Festival in 1991 and received approval and great support from the Qingdao municipal administration, even to the extent that the city became the main sponsor. The first festival was opened on June 23rd, 1991, and has been held annually ever since.

For more info on our services and Qingdao operations pls. contact Clemence in ODM Shanghai. clemence@theODMgroup.com

Home » Magazine » Qingdao base for ODM.