Robinsons, the Britvic-owned squash brand, has launched a tennis themed on-pack promotion as it gears up for the Wimbledon tournament. Being an official sponsor of the Wimbledon for the past 75 years, this promotion encourages families to get together and play tennis – bringing the fun and excitement of Wimbledon out of the courts and onto the local parks.

The promotion, as shown on the bottle, will be available on all variants of Robinsons Fruit Squash, Fruit & Barley and Robinsons Select.

This Promo Mechanism offers consumers the chance to win a ‘Street Tennis Kit. Enter the online competition using the last four digits of the barcode found on the label at www.robinsonsfun.com/wimbledon.

Giving away this very complete set every hour, Robinsons creates an excellent buzz and strongly promotes its association with Tennis and summer games.

Contents of Street Tennis Kit include: 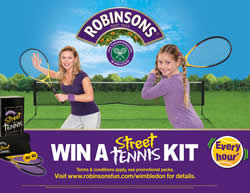 By offering promotional products relevant to its heritage with Wimbledon, this promotion creates synergy with its squash and  is able to successfully drive up brand awareness. For similar sports kit, ODM will be more than happy to brainstorm its contents and outlook for you.