We asked one of our clients to give us their impressions during a China factory visit during procurement recently. Read below to get an idea of how they felt during this trip. This is one of a series of blogs that we will title: Buyer Diary. Terry Towel, a pile fabric is known as towel worldwide. In terry towel loop piles are present on one or both side of the fabric. The research indicates that the terry towel was first developed in Turkey and later towel manufacturing concept spreads across the world. Manufacturing of a basic terry towel has been discussed in the following paragraphs. 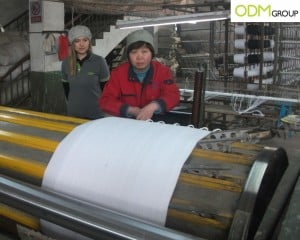 Towels are classified according to its weight, production process, pile density and pile presence on fabric surfaces, formation,  structure and finishing. Terry towel is one type of woven fabrics where during weaving of this fabric 2 beams are used. One beam for ground fabrication and other beam for loop formation. The weaving concept has been shown in the following image. 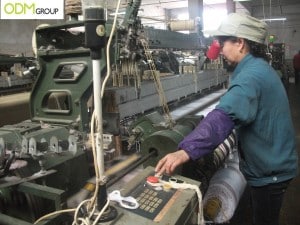 1. Weight: Weight  should be same as required by customer. Every manufacturer has some template or software where towel manufacturers calculate everything likes pile’s height, density of picks and to meet requirement. This database or any software has been developed through some basic calculation. 2.Softness: It depends on properties of the yarn used in pile, finishing chemicals. 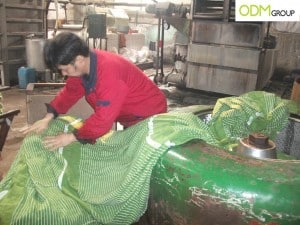 3.Lint: It is measured by weight of accumulated fiber collected from washing machine and tumble drying machine during testing.

Woven terry towels are a popular and very cost efficient making them an ideal item for corporate promotion. The designs are actually ‘woven’ into the towel using coloured thread. The costs of promotional woven terry towels can be kept low compared to printed towels.

A popular additional option to the woven terry towel is a soft velour finish. After weaving the towel, the terry loops are cut as a finishing touch to create the velour finish. Velour is very popular for beach towels and for children’s towels. Adding a velour finish to your promotional towel order will add 15% to the final cost.