Consumer Electronic Show 2016 #CES2016 has just finished and ODM has been tracking this event. This event was the leading global event for the consumer electronics industry.

For this year’s Consumer Electronic Show, The ODM group followed the event closely and gathered information from over 9000 tweets before and during the event. After analyzing this information we created the following word cloud, with the number of mentions being represented by the size of the word. 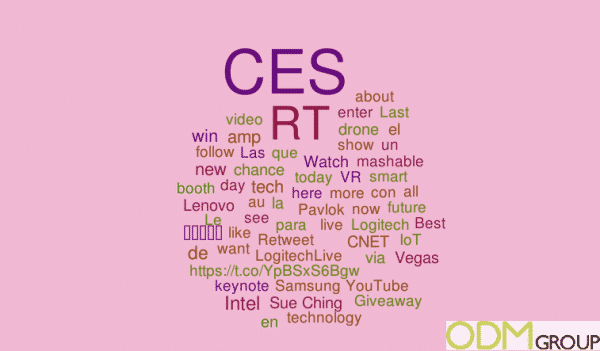 What was the conclusion of this Event Tracking?

As seen in the word cloud the big focus was on Electronics, with “Logitech” being particularly focused on.  Though there were interesting mentions of “YouTube” and “Intel”. These word clouds are great at understanding what it is that attendees are talking about and what they find to be most interesting from this event.

Alongside this with this event tracking, we also found out who the 25 most active people on twitter were. This type of event provides a good opportunity to increase your brand awareness through the use of social media. The top 25 are listed below. 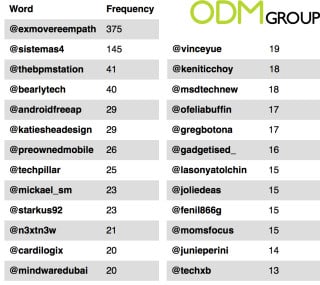 CES is the world’s gathering place for all who thrive on the business of consumer technologies. Held in Las Vegas every year, it has served as the proving ground for innovators and breakthrough technologies for more than 40 years. Known as the global stage where next-generation innovations are introduced to the marketplace.

The Consumer Electronic Show 2016 showcases more than 3,600 exhibiting companies, including manufacturers, developers and suppliers of consumer technology hardware, content, technology delivery systems. There was also a conference program with more than 200 conference sessions and more than 150K attendees from 150 countries. 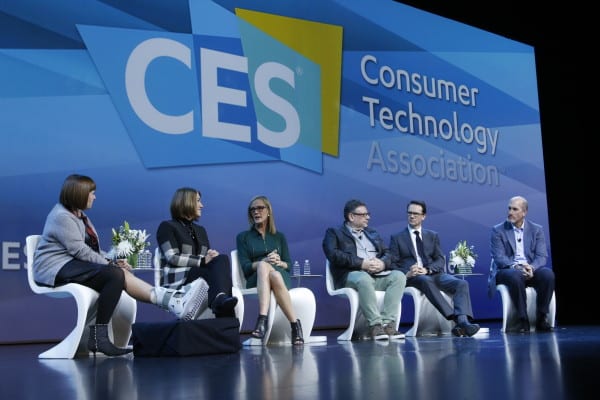 Industries unite. Technology connects. Innovation betters the world at #CES2016. This year’s event closes as one of the most influential events on the planet bringing together every major industry to better the world through tech innovation.

The ODM Group is always following new market trends by tracking events and conferences. For more of our case studies on previous conferences see the list below