Here is a good example of a successful limited edition DVD pack. Last years blockbuster movie The Dark Knight Rises collected a massive $1,067 in takings from the box office. After success in the box office,  the limited edition broken cowl combo pack was released December 4th 2012. Movie buffs who were lucky enough to get their hands on the package had a pleasant surprise. Included in the limited edition pack were the following movie merchandise items: 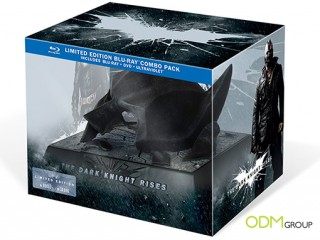 After a film has hit the cinema and the fans have all been impressed, what then? Hardcore fans will then go on to buy the DVD release and then eagerly await any possible sequel. By offering a limited edition set to remember the film by, a movie franchise can increase its revenue and impress its fans. After all, the movie business is all about the fans. Value is added to the set byoffering bonus material, gifts and unique custom packaging. Custom packaging  is often the central factor that excites the fans. As seen in the Batman example, the mounted mask is also the DVD case. The DVD case then makes a stunning table top collectible item with sentimental value to the customer as well as monetary value as it is a limited edition release making it a rare item.

Check out another example of innovative packaging: