Here we see the attractiveness of a mounted figurine included in a gift set. Fresh from the success of the latest installment of The Lord of the Rings, the adventure continued this year with the release of The Hobbit: An Unexpected Journey. The DVD gift set of the same name is now available for pre-order from Amazon. The DVD box set offering revolves around the magical action center statue piece featuring the lovable Bilbo Baggins. The mounted Figurine in fact depicts a sequence from the film known as ‘The Riddles in the Dark’ featuring Bilbo and Gollum. Included in the gift set is the 3D Blu-Ray of the feature film, as well as numerous bonus DVD disk material. 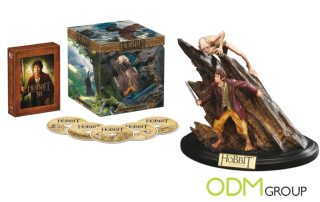 The attraction of figurines with gift sets.

DVD and movie gift sets both utilize figurines to add value to the total offering. The attraction of figurines is based on the fact that it will be a replica of the favourite action figure from the film or game. The figure has a strong collectability factor as they are limited edition artisan items that fans hold in high value.

A quick look at the stages of Figurine manufacturing in China

Sampling and Moulding – The first sample has to be perfect before a factory will go ahead and make a mould for mass production. Worthy to note is the fact that  different parts of a figurine may  require separate moulds.

Plastic Injection Process – PVC material is injected at a high temperature into the mould. The mould then cools down and the basic figurine is ready. After polishing and assembly comes the painting

Stamping Process – Stamping machines are used to create the realistic aspects of the figurine such as eyes and lips.

Assembling Process – The most labour intensive aspect which includes hand gluing the parts to assemble the final figure.

For more information on the manufacture and promotions that include figurines please check out below: