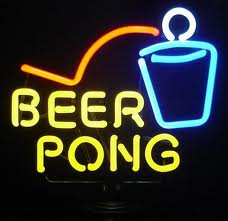 Players are supposed to throw a ping pong ball across a table in order to land in a plastic cup full of beer placed on the other side. If successful, the thrower picks one of its opponent to drink the content of the cup.

The multiple plastic glasses are set up in a triangle formation on both end of the table and two teams or 2 to 4 players confront themselves in a fierce battle. The losing team is the one with no liquid left in its cup.

More than a simple game, Beer Pong became and institution and even created its own world tournament. Although the success of the game remains limited to the North American continent, it still offers numerous opportunities to showcase your brand to a very targeted and sought after audience: university students.

Take the example of the following Beer Pong table: easily customizable, it offers a very large area to showcase your firm’s logo and remains an inexpensive item to offer.

If you have any other potential ideas related to Beer games, please do not hesitate to contact ODM.