Carabiners are a mountaineering tool which climbers use to string up their ropes.  It has found its way into domestic use for keychains and with this have also been adapted for a multitude of Promotional Products.

Very handy as their latch system makes it easy to attach & remove items quickly.  These carabiner keychains are also tougher and larger than keyrings, making them sturdier and easier to locate.    This means any promotional usage results in increased perceived value.

Carabiner pen – doubling as a keyring.   Leave a quick note or record someone’s telephone number. No more having to search or ask for a pen!   The 2 parts of Carabiner & pen can come in various sizes. Pens can be refillable or disposable, and can even separate – attached to the carabiner instead of being built into it. For an innovative twist, you can also have the Carabiner twist out into a pen when opened like in picture below: 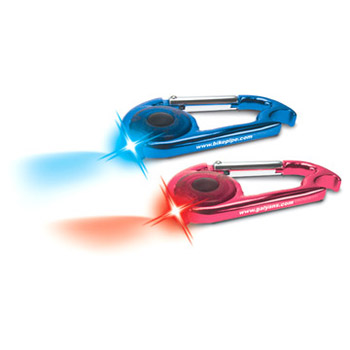 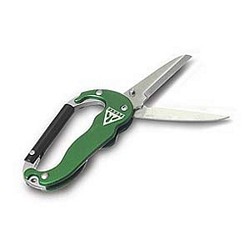 These multi function carabiners are ideal giveaways for parties, events and trade fairs. They are light, durable & incredibly useful for securing whatever you need. Logo can be engraved on both sides of the carabiner, and its design, color & function can be customized to suit your promotional needs.