Selecting a profitable custom instore display is no different from choosing your dishwashing detergent brand. You will serve the new campaign to your beloved customers, so they better not see poor manufacturing points on it. In case you haven’t found good POS inspiration for it, your should consider this Fairy Liquid advertisement. 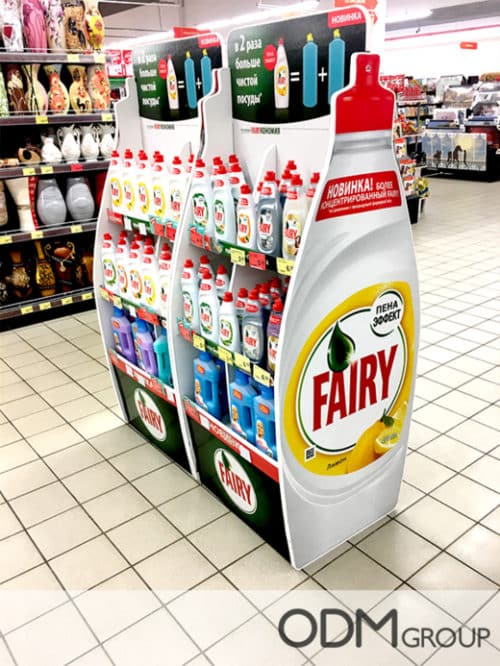 It is the type of marketing that clearly calls for attention. Rather than making a bottle-shaped standee, the brand created two and turned them into walls for a shelf. Because of it, the people walking on either side of the point-of-sale promotion can notice the display.

Another factor we should point out is how and where P&G assembled this framework. The shelf design is already obvious here. The containers may have the same red cap, yet the main ingredient isn’t similar for all. Hence, putting divisions as tall as the biggest bottles on each layer makes setting them apart easier for consumers.

Do you also realize that the promotional merchandises are not in the detergent section? The rack nearest to it even exhibits ceramic vases; that’s why they do not blend in. The distinction that the location provides becomes a benefit for the company – as expected – since there’s nothing like it in the area. 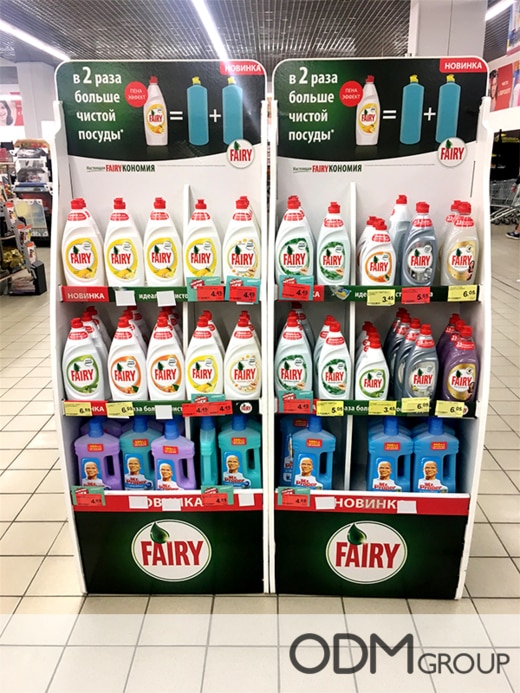 The top and bottom pieces seem fascinating as well in a marketer’s POV. The latter holds the Fairy logo, while the former shows the cleansing power of the dishwashing soap. You may interchange their position for your ad, of course, but the idea has to be concise. Doing so allows the shoppers to organize their thoughts about the products.

Perks from the Custom Instore Display

Customizing an MDF material for your POS needs is recommendable for brands whose products will go to supermarkets and similar places. It goes in between cardboard and actual wood; that’s why you get both sturdiness and cost-effectivity. You may choose what kind of finish the rack will have also.

Contact ODM if you want a custom instore display for your merchandise soon.

Would you like to see other unique POS displays?