Just like every year, our marketing team visited the International Hotel & Food Expo (HOFEX) in Hong Kong to see what was happening on the market in terms of food promotion. If you couldn’t attend to the fair yourself, we hope that these few pictures will help you catching a glimpse of what you missed.  Though no words or pictures would ever come close to the taste of all the products we’ve tried that day.

We realized that a lot of brands were using some very traditional symbols (sometimes even stereotypes) of their country of origin to promote themselves. 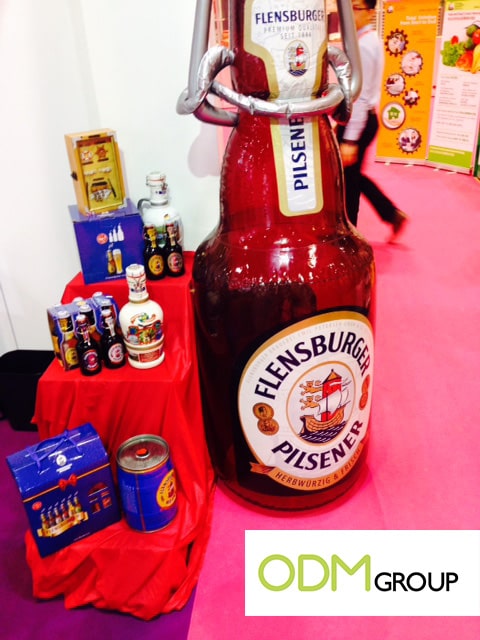 We spotted this giant inflatable beer bottle POS on Flesburger‘s booth for example. If you look closely you can see their limited edition ceramic bottle in a very traditional German style.

If you like traditional, you will surely like this other brand that used wooden shoes as a part of their food promotion. It may sound crazy but it’s actually a very smart idea. This Dutch cheese brand decided to use tradition 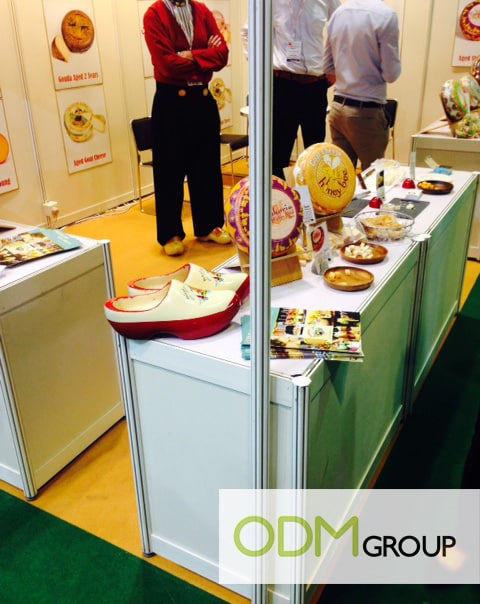 We usually say that giving away a small gift for free will stop around 70% of the people that walk by your booth. Offering free cheese is probably stopping a good 50% already so we naturally thought that by manufacturing tiny Dutch wooden shoes (as a keyring maybe) and giving them away, their food promotion would have skyrocketed… Of course, this is just our opinion!

There was some very unique bottle packaging out there.

Violin, high-heel shoes, horse, lantern… Just name the shape you want! If you are a drink brand, your bottle design plays a huge part in your brand identity and very few people know how far you can customize a glass bottle. If you ever need assistance in packaging or bottle design, Mindsparkz is probably the creative agency you should talk to.

We have already explained the importance of giving away a gift to your potential client during a fair, but we did not mention that toys are probably among the best giveaways ever. 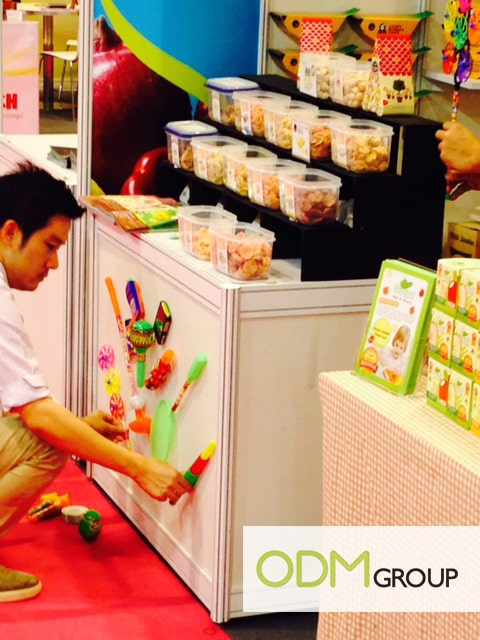 The company on the picture is promoting dried fruits on its booth, nothing really sexy or eye-catching as it’s all packaged in plastic boxes. So what have they done? They decided to come with bubble pistols to grab the attention.

If you are not a bubble gun specialist, it was pretty much something like this:

They also had some more inexpensive toys (water pistol, plastic rackets, etc.) to give away to their clients. We really loved the idea.

Finally, remember that it’s not because the product you sell is difficult to promote that you can’t promote it at all, at the ODM group, we specialize in food promotion so contact us now, to discuss your next promotional campaign.