A gift pack makes a great prize to give away in prize draws. The movie Percy Jackson: Sea Of Monsters is giving this prize gift pack to one lucky winner. Simply enter into the competition and you will get a chance of getting your hands on the prizes that are up for grabs. The movie Percy Jackson: Sea of Monsters is based on the popular children’s book series that contain 10 titles in total. The movie release is based on the second book ‘The Sea of Monsters’. The movie was released in US theaters on August 7th. 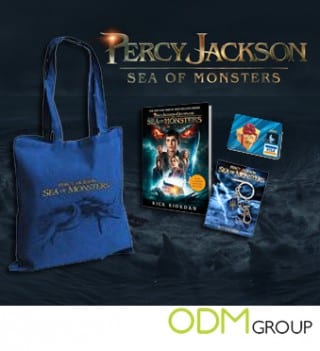 Included in the gift pack we can see

Gift packs are a great marketing tool aimed at the younger generation and especially children. The aim is to treat fans to merchandise goodies that makes the receiver feel special. Through the use of merchandise promotional products, the user will grow more interested and involved with the franchise. This will result in a higher probability that the person will want to see future productions of the movie or game and will drive sales of related merchandise. The gift pack items also serve as a marketing purpose for other potential target customers. They also aim to create ‘hype’ and excitement about a movie or game release, constantly exposing the movie title to the public. Merchandise is also used to increase the reputation and image of the brand.