Minimum Wage by Province in China, 2010

With China’s growing economy, worker’s expectations on salary are rising all the time.   So too is their cost of living.  The government periodically adjusts the minimum wages to cope with these changes.   Minimum wages in China are decided at the provincial level. The Department of Labor and Social Security tracks a large number of economic development indicators: the local cost of living, the CPI, the housing funds, the unemployment rate as well as the area’s level of economic development and many others before issuing locally a minimum wage. China’s level of development and cost of living varies widely across the mainland. See Graph for breakdown by province for 2009 & 2010. 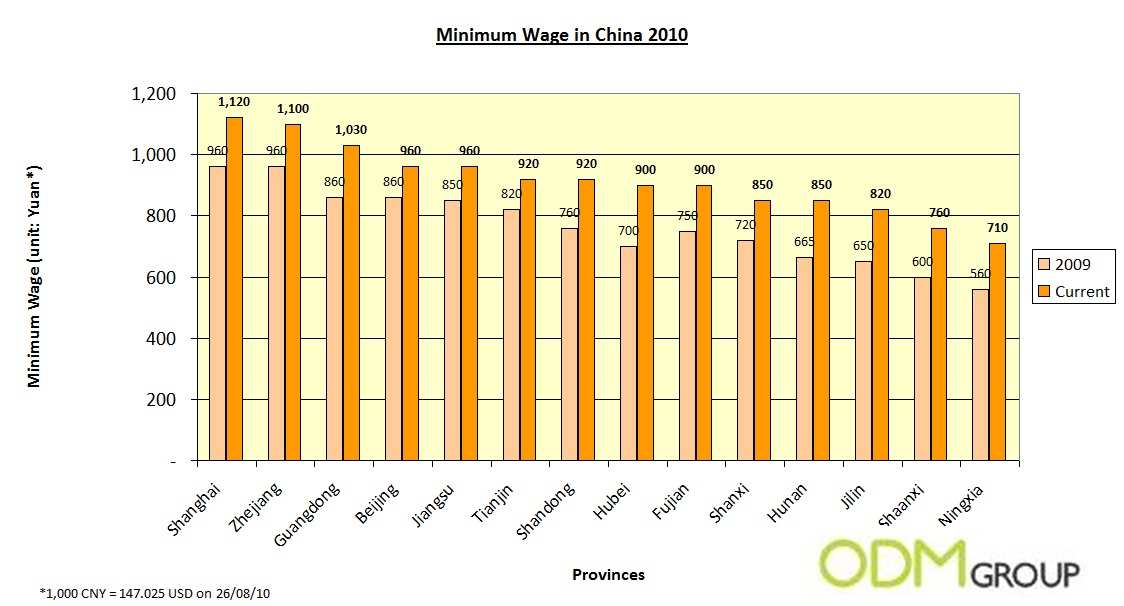 For info, RMB 1000 is currently worth US$ 147 as of August, 2010.   Setting higher Minimum wages in China provide for better standards of living for employees.  Compensation for their work has risen in 21 out of 31 mainland provinces in the first half of 2010. It is expected that the other provinces will follow these moves by the end of the year.  Although raising wages every year may seem disruptive to business, China is still extremely competitive globally – proven by their strong GDP growth Year on Year.

The minimum wages are introduced by the local governments and communicated through major newspapers.  Each company has to notify its employees within 10 days after the announcement. Gaps however remain between the period of announcement and the actual implementation of the law.   Many factories will try to get around these laws by forcing overtime work at lower rates but the acute labour shortages these days give a lot more bargaining powers to employees.

Urban areas and areas along the Eastern Coast naturally have the highest wages with wages declining in provinces moving inland.  As wages increase buying offices are increasingly pushing production to factories in lower cost regions. 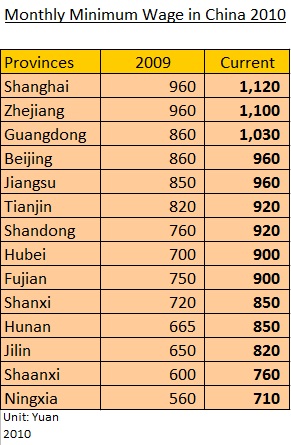 See also articles on Hokou & getting visas for China and general Blog Category of China Living.  (Syndicated on the PPI Blog).