Hot off the production line today August 13th in the United States, comes a not to be missed collector’s edition game release.  Presented is Payday 2 Collector’s edition for Playstation 3 and Xbox 360 by 505 games. The offering comes packed with a whole host of irresistible extra goodies to keep the gamer happy. With a limited release of only 50,000 units – get yours fast. Priced at $59,99.

Included in the edition are: 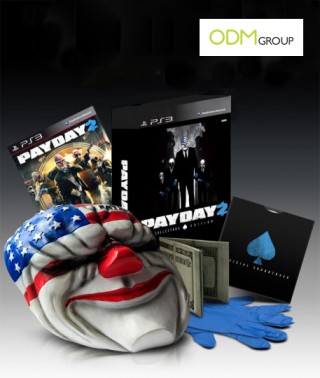 The Need for Collector Edition Games

In the hot race for gaming exposure in the saturated gaming industry, collector editions are all the rage these days. If gaming brands can offer their games with added perceived value then they are on their way to help drive sales. The drive in sales is what will help them compete with other game publishers. It will also help with the growth of the company. After all, if producer starts offering collector edition items, other producers will want to compete by offering similar or better items for their games. The crucial point in offering collector edition games is by releasing unique packages to game fans. Offer something that hasn’t  been done before and you have their attention. Remember: gamers are a fickle audience so they should be listened to! Also gamers are avid collectors of memorabilia, if they see enough perceived value in a collector editions additional benefits then the offering is a definite hit.