Take a look at this truly unique Instore POS display by True religion. True Religion is an American clothing company. It is currently offering a double promotion within their stores in Hong Kong. Keep on reading for more. From the photo above, you can see that True Religion has decided to decorate their Instore POS display with vintage items. For instance the table is made from a worn wood. The Ham Radio, vintage Alarm clock and the big True religion logo is likely to be eye-catching. This is likely to draw the attention of passers-by to the two promotional posters. This Instore POS as a result is likely to convert the footfall into potential customers when they decide to investigate Instore. 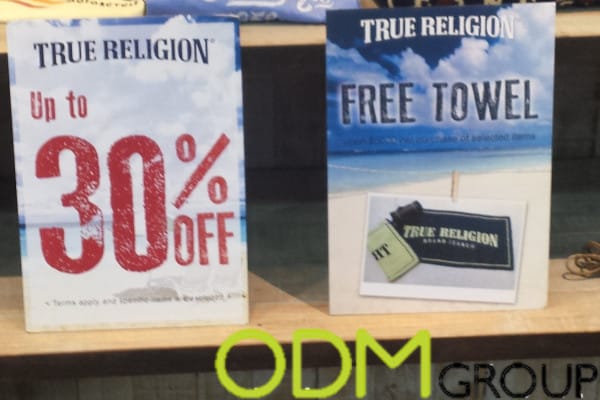 From the above photo, the posters advertise that there is up to 30% off of certain products. As a double promotion a free towel is offered as a gift with purchase with the spending of $5000 Hong Kong dollars. The customer as a result is incentivized to have a look around in store due to this promotion. They are more likely to purchase something as it is a reduced price. The customer is also further influenced to spend more to qualify for the gift with purchase of the towel. This simple promotion allows True Religion to raise their revenues. They are also able to sell off the past seasons stock. This allows True Religion to replace stock with the Autumn season clothes. The towel is also likely to be used as a day-to-day product. As a result it will have a high visibility in the home of the user. Is also a great product to remind customers of the brand.

Inspired by this unique Instore POS display take a look at these other examples: