This promotional gift idea stems from a campaign that Woolworths is currently running. In this campaign, Woolworths’ gives away a domino with every $20 spent in store or online, which entices customers to purchase more, in order to complete their set. The unique aspect of these dominoes is that they have a different Disney character on each tile – so why not do the same with your brand?

In Woolworths description of the promotional campaign, they say “there’s 44 characters from all your favourite Pixar films to collect. Start your search to infinity and beyond for Buzz, leave the door open to find Sulley and make sure mum saves a car spot for Lightning McQueen.”

A branded domino set that will definitely bring about a lot of talk. As one thing you can be certain of, is that if Woolworths‘ and Disney are running a campaign such as this, then it must work incredibly well to increase both brand awareness and sales. 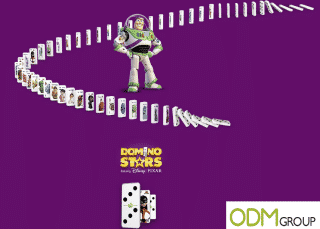 Why do branded dominoes make the perfect promotional product?

A personally branded domino set would work brilliantly as a gift with purchase or even in a giveaway, for a number of reasons. Firstly, Dominoes is a fun game that the whole family can play, so the domino set will leave a positive association with your brand, which will make them more likely to recommend or purchase your products.

The second benefit is the strength of dominoes, as it’s likely dominoes will never break, which will reassure your customers of the quality of your brand. This also means the dominoes may have good visibility, as they’ll likely be used for years to come, when family or friends come over, which will also raise awareness of your brand and products to others.

Thirdly, it’s a very high-end gift, so whether you giveaway the dominoes set, or provide it as a gift with purchase, your customers will recognize that you must appreciate their business and support to give such a high quality item, which in turn will raise awareness through recommendations, and also make your customers more likely to make a repeat purchase with you, rather than your competitors.

Finally, sets of dominoes offer something many promotional products simply can’t; complete customization, what this means for you is that you could potential have a very large, flat area for your logo, that will be interacted with by your customers.

Another aspect to keep in mind, is that if you run this promotion in the same way Woolworths and Disney have, then it’s all but guaranteed to significantly raise the amount of repeat purchases you get from your customers, as people will want to complete their sets of dominoes, such as in the Woolworths promotion, there are 44 characters to collect. 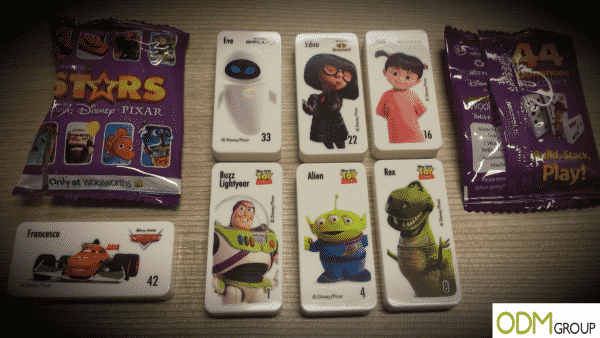 Check out the Terms & Conditions of this promotional campaign by Woolworths:

How to receive Dominoes

2.Woolworths customers will be eligible to receive one (1) Domino at the point of sale for every $20 spent at participating Woolworths supermarkets, Woolworths Online and participating Caltex Woolworths co-branded fuel outlets.  There are forty four (44) Dominoes each depicting different Disney Pixar characters to collect.  The award of Dominoes is subject to stock availability.

3.Dominoes will be made available between 4 March and 14 April 2015 (Promotional Period) at participating Woolworths supermarkets, Woolworths Online and participating Caltex Woolworths co-branded fuel outlets..  Purchases at other Woolworths group outlets will not be counted towards the promotion.

4. In addition to Dominoes made available to customers under clause 2, customers will be eligible to receive bonus Dominoes when they make specific purchases at participating Woolworths supermarkets or Woolworths Online during the Promotional Period.  Customers will be eligible to receive one (1) Domino for every product purchased from one of the participating brands listed below.

9.  Woolworths reserves the right, at its discretion, to introduce further Participating Brands and products during the Promotional Period that will entitle customers to bonus Dominoes upon purchase.

For example, if a customer purchases three (3) Tip Top products in a single transaction between 4 March 2015 & 17 March, that customer will be entitled to collect three (3) Dominoes.

The abovementioned three (3) bonus Dominoes will be in addition to any Dominoes that the customer is eligible to receive for every $20 spent at participating Woolworths supermarkets or Woolworths Online.

12. If Woolworths forms the view in its sole discretion that customers have not complied with these Terms and Conditions, Woolworths reserves the right to withhold Dominoes from that customer.  Woolworths or its nominee’s decision is final.  Dominoes cannot be redeemed for cash.

13. If this promotion is not capable of running as planned for any reason beyond the reasonable control of Woolworths, including but not limited to, infection by computer virus, bugs, tampering, unauthorised intervention, acts or omissions of third parties, technical failures or anything which corrupts or affects the administration, security, fairness, integrity or proper conduct of this promotion, Woolworths reserves the right, in its sole discretion, to cancel, terminate, modify or suspend the promotion.

15.  Without limiting clause 14, Woolworths, in its sole discretion, may have attendees removed from its premises who act in a manner that is offensive, unlawful, obscene, threatening, harassing or otherwise inappropriate and reserves the right to withhold Dominoes from that customer and/or prevent them from attending any other Build, Stack and Play Days.

16.  Certain legislation may imply warranties or conditions or impose other obligations including statutory consumer guarantees which cannot be excluded, restricted or modified except to a limited extent.  To the extent permitted by law, Woolworths excludes all guarantees, warranties, conditions or other terms that apply under or are implied by statute, common law or trade custom or usage except as set out in these Terms and Conditions.

17. If in the conduct of this promotion, Woolworths is liable for a breach of any guarantee, warranty, condition or other term that applies under the Australian Consumer Law or is implied by any other Commonwealth, State or Territory law that cannot be excluded, Woolworths’ liability under that legislation is limited, to the extent permitted by law, to the cost of replacement of any benefit provided.

18. To the extent that Woolworths is collecting or accessing any personal information as part of this promotion, such information will be treated in accordance with these Terms and Conditions and Woolworths’ privacy policy which is available at Woolworths’ website at www.woolworths.com.au