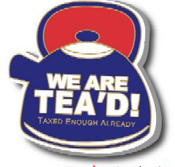 The Tea Party movement is a populist, conservative / libertarian political movement in the United States.  It emerged in 2009 through a series of locally and nationally coordinated protests.

There are some great promotional products coming out from this movement – a good example is this Kettle shaped Lapel pin but there are many more.

Our Tea Tool invention is if course one of our favourite promotional products and we offering specials to US based parties who might wish to conduct a fun promotion –  the Epoxy Doming on top of these allow for striking full colour messages.  Let people take any frustrations out on their tea bags by squeezing this tool hard – we have tried it and it is thoroughly theraputic. (Like it on Facebook)

Our Products Design team can certainly help with the customization.

More on this political movement – Tea Party Protests were partially in response to several Federal laws: the Emergency Economic Stabilization Act of 2008, the American Recovery and Reinvestment Act of 2009 and a series of healthcare reform bills.

The name “Tea Party” echoes the Boston Tea Party, a 1773 incident when colonists destroyed British tea rather than paying what they considered a tax that violated their right to “No Taxation without Representation.” As of 2010, it is not a national political party, does not officially run Congressional candidates, and its name has not appeared on any ballots.

Send us your favourite Political Promotions for our blog.