ODM staff frequently take flights around China from the airport in Shenzhen.

Since the 1st of June 2011 the green subway line extension (#1) opened for general use. The great benefit of this extension is that it connects the Hong Kong border (and train network) with Shenzhen’s International Bao’an Airport.

When arriving at the last stop in Hong Kong the traveler simply walks out through HK and then Chinese immigration, then gets back onto the subway on the other side. On either side the directions to the subway are very well displayed and can’t be missed. 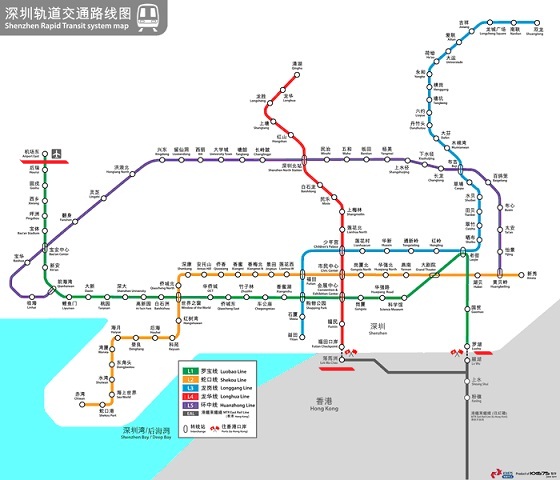 The three red underlined areas show the two border crossings from HK (in grey) to Shenzhen and the last red underlined point (top left) is to display the Airport subway stop.

If you are leaving early in the morning or during rush hour at the end of the day ODM strongly recommend taking the subway. The traveling time can be the same as using the express bus services such as China Link to the airport but you will never be stuck in traffic in the subway. From Central Hong Kong it takes a good hour to get to either border crossing. Once in Shenzhen and in the subway one should estimate around 30min to 45min to get to Bao’an airport.

Check out our other blogs related to traveling to China: