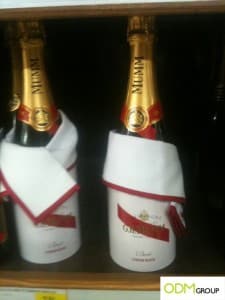 Pernod Ricard is a French company that produces distilled beverages. The company’s eponymous products, Pernod Anise and Ricard Pastis, are both anise-flavoured liqueurs and are often referred to simply as Pernod or Ricard. The company also produces several other types of pastis. After the banning of absinthe, Pernod Ricard was created from the Pernod Fils company, which had produced absinthe. It is now a worldwide conglomerate. Pernod Ricard owns the distilled beverage division of the former corporation Seagram, along with many other holdings. In 2005, the company acquired a British-based competitor, Allied Domecq plc. In 2008, Pernod Ricard announced its acquisition of Swedish-based V&S Group, which produces Absolut Vodka.

How do the champagne bottle covers make an effective gift with purchase?

Customers will be attracted to buy the G.H Mumm champagne in order to get the champagne bottle covers for free. What do you think of this gift with purchase?