Coca-Cola is the biggest soda and drinks company in Asia and the world. Coca-cola POS displays have been key to the company’s success over such a long period of time.

Point-of-sale displays are essential marketing tools for successful businesses. POS displays attract the attention of customers in many different retail environments. If you haven’t tried using POS displays for your products, you’re missing its huge benefits. If you want to give it a try, this example of Coca-Cola POS display, spotted by our team in Italy, is good inspiration for you to start using this marketing tool. 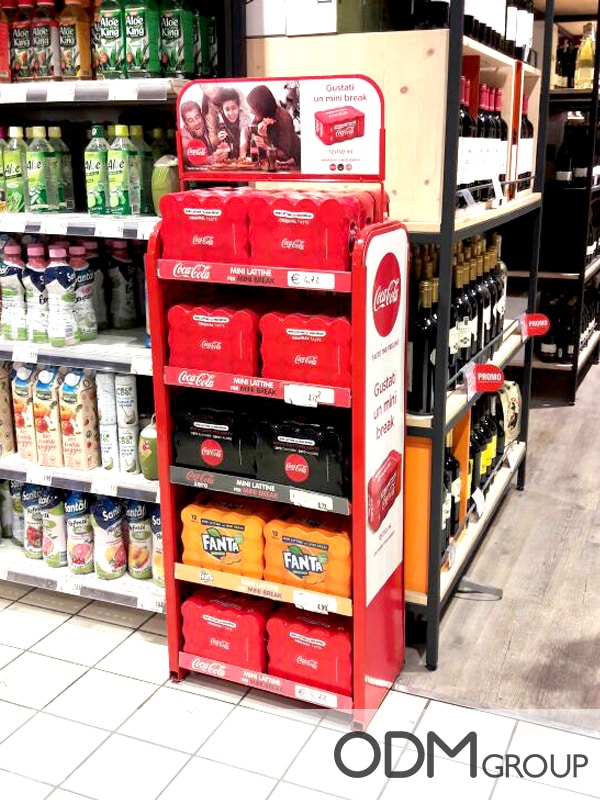 For decades, Coca-Cola has made its name in the advertising and marketing world. This is not just because of their explicit desire to improve the products. But also, the creative, unique, and one of a kind Coca-Cola POS displays that have changed the face of the drinks retail industry.

Coca-Cola is the producer of different drinks such as Sprite, Fanta and more. Since Coca-Cola has a wide range of products under its name, the company make sure that every product is given strong and innovative promotion.

However, here instead of creating different POS displays, Coca-Cola uses a single stand for several drink brands, offering them in a special pack. This kind of promotion will give the target consumers the chance to choose which products would they like to purchase from their selection. Choosing the right POS display for your campaign to new places and new customers. Furthermore, it can take your business to new heights of success.

Check out our blog to see other promotional ideas by Coca-Cola promotional merchandise and more:

Want to see more examples of Coca-Cola’s marketing expertise? Be sure to read this blog!

Promotions can be made extra-effective by making them fun! Check out this Jenga-style game offered by Coca-Cola.

Offering trendy products will always be a good marketing move! Be sure to read this blog on Coca-Cola’s selfie stick promotion!