This DWP (discount with purchase) promotional campaign, which we spotted in Hong Kong, was run in anticipation for the new Paddington Bear film – which was released in late January. 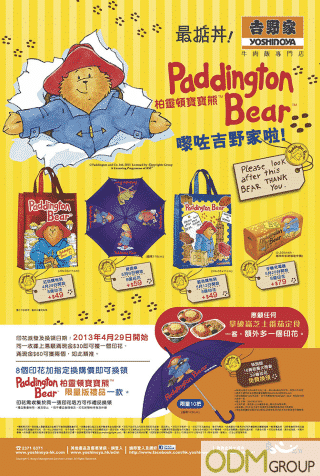 What makes this DWP Promotional Campaign so unique?

What makes this marketing campaign so unique, is the fact that they’re running both a discount with purchase campaign and a loyalty scheme in conjunction with each other.

By using both the loyal card and discount with purchase campaigns together, it’s a certain winner for those running the campaign, for a number of reasons. Firstly, the rewards scheme will entice consumers to make numerous repurchases, in order to get a more expensive product at a discounted price.

Secondly, even when consumers earn enough stamps to get one of the promotional products, they still have to pay for them, which means that they’ll still be selling and earning more, regardless of the fact it’s discounted.

Thirdly, it will spread brand awareness, as the merchandise will all be branded with the Paddington Bear logo, so this will lead to more consumers participating in the campaign.

Finally, it will increase the amount of fans of the shows, especially to children, which is the campaigns target audience. With increased fans comes more purchases of general Paddington Bear merchandise, and more viewings of the films when it was released in theater/on DVD. So ultimately this campaign does an incredible job to not only bring in more sales, but also to spread awareness of the film.

If you’re looking for similar promotional goods to what are used in this campaign, be it umbrellas, bags or plush toys, then please feel free to contact us here.